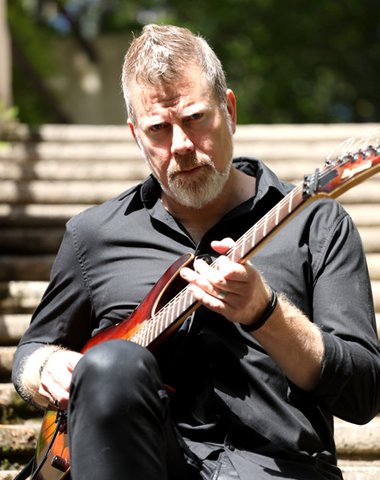 Sweden is quite well-known for it´s many high quality-guitarists. Prepare yourself to add yet another high quality-bender to that list - MATHIAS HOLM KLARIN.

Just don´t expect a full-time shredder that knows nothing about feeling and subtlety. Mathias has been brought up listening to players like Al Di Meola, Vinnie Moore and Mike Oldfield, giving him quite a broad perspective of influences.

He picked up the six-string at the age of 13 and has with great self-determination and ambition though himself to handle the guitar with great skill.

In 1995 Mathias decided to put his songs on record and knowing how hard it is for an unknown solo-guitarist to get a deal, he decided to record the album on his own.

With the aid of drummer Mats Eriksson-Wigg he created the outstanding platter "Pictures Of A Dream" (he even made the cover himself).

Mathias has been compared to the likes of Vinnie Moore, Yngwie Malmsteen and Al Di Meola and when listening to Mathias album, you can´t but see why.

This is also why Japanese label Shinseido/Sound Treasures picked Mathias album as one of their first foreign releases.

Mathias mixes smooth, sensitive notes with fast fret-board runners in a highly intriguing mix. This and the fact that he has the ability write great listenable music makes him a respectable musician.

If someone gives this guy the break he deserves, he can go far, very far!

Author of "The Encyclopedia Of Swedish Hard Rock And Heavy Metal"

Since the release of Pictures Of A Dream I have been recorded albums with, OSV, SUBWAY, MindSplit, song for compilation albums ANTONIO VIVALDI - A NEW SEASON and L.V. BEETHOVEN - ODE TO PERFECTION. And my latest release Dream Catch.